The angles roaming high in the sky and damsels dancing above the clouds, paused for a moment and wondered in awe, and showered a million blessings and a trillion boons on all the Dhrti yogis who have done something unusual and extraordinary as a token of thanks and gratitude to the nucleus of the solar family, leaving other neighboring stellar and planetary guys envy.

Yes, there was a palpable magical esoteric earthly alchemy in the air in the wee hours of the morning on January 26th as 55 Dhrti yogis set on a trailblazing hallmark of 108 Sun salutations individually (each round 24 steps) to greet, cheer, and embrace the newborn Lord Sun on his birthday, Ratha Saptami, in their hearts.

All yogis in the brand new theme dress for the event lined up before 6 a.m. like disciplined soldiers for orchestrated symphony of the event.  Thanks to Gupta ji master, who started first the note through the powerful Aditya Hridayam to mark the beginning.

With just 2 or 3 short pause in between, all yogis have reached the magnanimous number 108 rounds.  With every round the determination, energy, and focus just multiplied and soared higher and bigger.

Young children, boys and girls, the sweet teens, the 20 plus young blood, the 30 something bravos, the 40 mighty, the 50 prudent, and the 60 wise have transcended all the barriers, limits, and reached the indomitable task of 108 rounds with grace.

The Sun smiled brighter than ever before in the sky and the Dhrti yogis shined radiant on the Earth.

In the word of Arthur Rimbaud,

“The Sun, the heart of affection and life,
Pours burning love on the delighted earth”

Special thanks to Sudha mataji for adding a glitter hue through beautiful Rangoli in front of the center’s gate.

Sincere thanks to all the Karma Yogis who have helped, assisted, and contributed to the grand success of the event directly or indirectly.

All glories to Lord Sun, the direct God, without His blessings, nothing is possible.  He clearly intended and wished all of us to greet Him on his Birthday in a big way; otherwise, after all, who are we? and where are we?  We are just a tiny microscopic population among hundreds of millions people across the globe.  His unfathomable mercy and oceanic love is clearly evident.

In the word of Khwāja Šams ud-Dīn, Persian mystic and poet, 13 A.D., who glorifies the Sun,

“Even
After
All this time
The Sun never says to the Earth,
“You owe me.”

Look
What happens
With a love like that,
It lights the whole sky.”

A trillion thanks to you all.  Promise me that you will be there on the same occasion, year after year, decade after decade all through the life shining brighter and brighter every time. 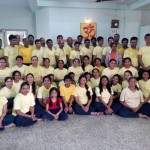