June 21st Summer solstice, means we are shifting from Uttarayana to Dakshinayana, and the grace period which began from Makara Sankranti would now get over by July 16th, 2015. Thanks to the Purushottama Masa which came after 19 years, one can avail double benefits with 100% discount. 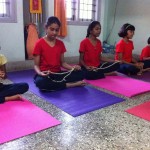 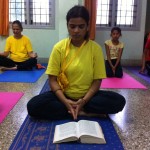 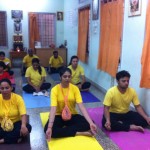 Most important was the sankalpa taken – to adopt yoga as a lifestyle – so that we can look forward to a better future for all. 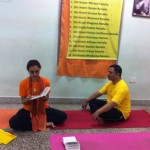 On this day, we conducted two sessions at the center. Asanas in morning and meditation in evening. 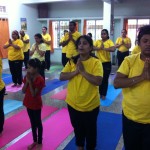 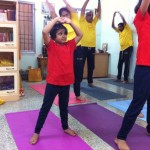 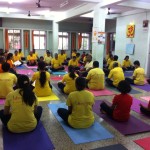 First sessions started at 6 am and went up to 7:30 am. As the purushottama Masa is on, and as in all the sessions chanting is going on, all practitioners started the session with Hare Krsna Maha Mantra one mala followed by reading Bhagavad Gita Chapter 15, all 20 shlokas with meaning.

Thus the whole atmosphere was charged with positive feelings.

Total of 50 practitioners, including 6 children were present to mark their respect to the first IYD. The session was led by Ramanaji. 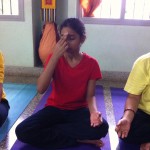 The asana class began with Tadasana, Tiryaka Tadasana and Kati Chakrasana 10 times each, followed by Surya Namasakara 5 rounds with Mantras. 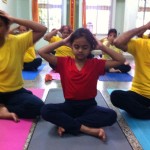 Nadi Shodhana and Brahmari pranayamas were practiced 10 rounds each, which was followed by short shavasana. 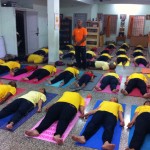 HG Murali Murari prabhuji from ICC, kumarswamy layout was also present practicing on IYD. All fortunate souls got the opportunity to receive gyaan prasad about what is the significance of purushotama month.

The morning session concluded with prayers and all enjoyed rich Badam milk after the session.

Many thanks to mataji who has been doing this karma seva in two different sessions, everyday, playing key role of leading all the 20 shlokas from chapter 15 which is known purushotama yoga everyday.

This evening session charged with bhakti  prepared the practitioners to go ahead with dharana (meditation) practice – Jyoti Trataka, gazing, ghee lamp is kept in front of the practitioner and you concentrate looking at the golden flame

The class concluded thanking the gurus with Guru Stotram, and shanti mantas, all led by Lakshmi teacher. A total of 25 members were present in evening session including five enthusiastic children who were present in morning also…HARI BOL to their enthusiasm!!!

The ever ready karma yogis, Kuldeep, Harshada, Manjusha took time off from their routine schedule and made delicious paneer laddoos as prasad for all, our Bala yogis enjoyed the most. 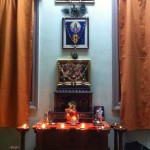